Microalgae are photosynthetic microorganisms able to convert light energy and inorganic nutrients into high-value compounds such as fatty acids, polysaccharides, or carotenoids. Astaxanthin, a red carotenoid pigment, is a very attractive molecule due to its antioxidant properties, which are significantly stronger than those of other carotenoids and vitamins. It has numerous applications in various industries, including cosmetics, aquaculture, nutraceuticals, food, feed, and pharmaceuticals. While most astaxanthin on the market is produced synthetically, the main natural source of astaxanthin, which still represents less than 1% of the total commercialized amount, is the microalgae Haematococcus pluvialis.

Scaling up the commercial production of astaxanthin from the microalgae H. pluvialis presents several challenges due to its unique metabolism. The biosynthesis of astaxanthin in H. pluvialis is a complex process that is highly up-regulated in conditions of stress and which coincides with the accumulation of triacylglycerols (TAGs). Thus, optimization of the various culture conditions such as nutrient level, light, pH, and temperature is necessary to achieve maximum biomass and maximum astaxanthin production. However, most of these optimal conditions are exclusive to each phase (biomass or astaxanthin). As a result, the current industry standard for cultivating these microalgae for astaxanthin production involves a two-phase strategy. First, in the “green” vegetative growth phase, cells are initially grown under favourable conditions like low light and excess nitrogen. Once optimal biomass concentration is reached, the “red” inductive production phase is triggered by exposing the microalgae to stress conditions such as high light, salinity, or an imbalanced carbon-to-nitrogen ratio, enhancing astaxanthin synthesis. Under one or a combination of these factors, H. pluvialis is capable of accumulating astaxanthin up to 5% of its dry weight.

While the two-phase process has been shown to be more productive than one-phase strategies in the literature, it also comes with significant drawbacks. Specifically, in the case of producing astaxanthin, half of the cultivation period is unproductive, lowering overall productivity. These challenges are further exacerbated when using traditional suspension cultivation methods, where microalgae cells are grown in liquid nutrient media before being harvested for molecule extraction. One approach to overcome these issues is the use of biofilm-based systems, where microalgal cells are closely associated with a substratum, separating most of the biomass from the bulk culture medium.

The key advantage of using a biofilm-based system in the production of astaxanthin is the significant reduction in the reactor and medium volume required to cultivate an equivalent amount of biomass. The high density of dry biomass eliminates the need for dewatering before downstream processing, making the process much more energy-efficient. In contrast, in planktonic cultures, which typically have low biomass concentrations of less than 10 g/L, the majority of the culture is represented by water rather than algal biomass, resulting in significant energy demand for harvesting. As a result, these systems are characterized by low productivity, high energy demand and high operating costs associated with the production and harvesting steps, becoming a bottleneck for commercialization.

To answer all these questions, our project aims to optimize the production of astaxanthin in H. pluvialis, in a rotating biofilm-based system using a combination of experimental, modelling and control strategies. Our main goals include:

The project is carried out within the bioprocess team of the Laboratory of Chemical Engineering and Materials (LGPM) and Laboratory of Signals and Systems (L2S) at CentraleSupélec, in close collaboration with the Biocore team at INRIA in Sophia-Antipolis. 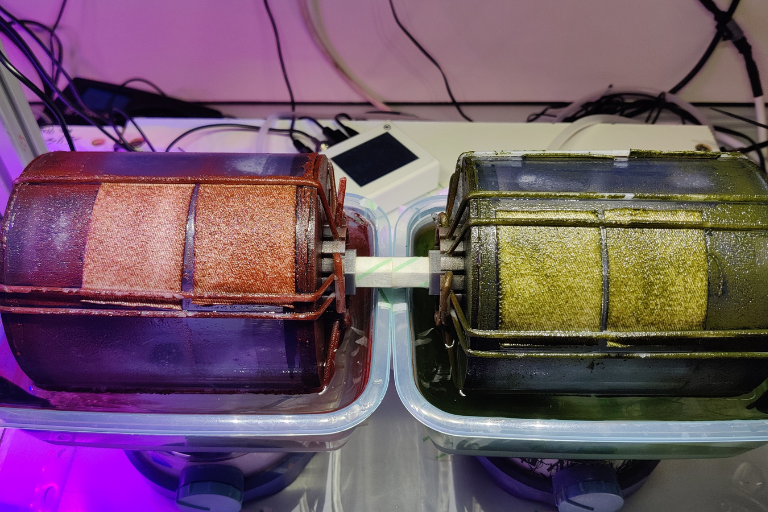 Figure 1. Rotating biofilm-based system at CentraleSupélec, with Haematococcus pluvialis biofilm in both red and green stages. 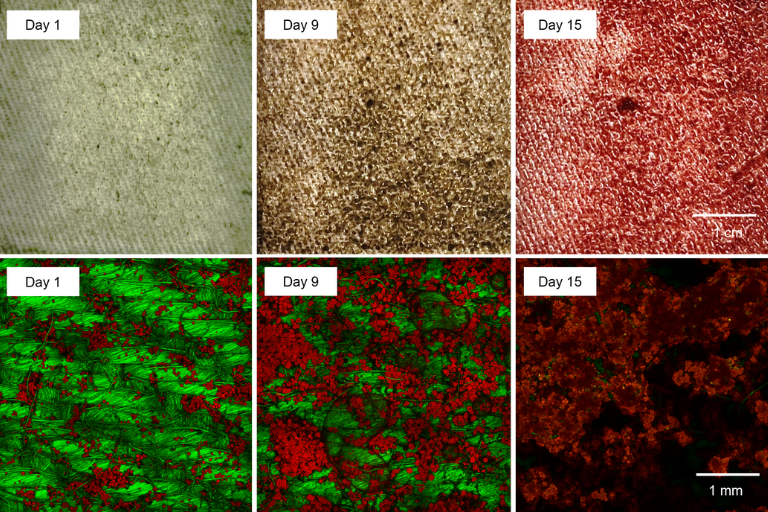 Figure 2. Images of the cotton fabrics on days 1, 9, and 15: accumulation of astaxanthin over time (from green to brown to red). Confocal laser scanning microscope images of the same fabric supports: cells (in red) attached to a cotton fabric (in green).