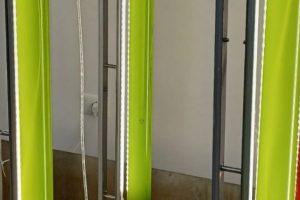 The optimization of microalgae cultivation has been occurring on two levels, genetically modified strains, and advanced control systems. On one side, the genetic modification of microalgae is aimed to enhance or modify the metabolic activity for biotechnological exploitation.

The selected microalgae species, mutants, or wild type, show higher photosynthetic efficiencies. They are also used as sustainable biofactories for enhanced production of added value components. The design of the production biosystem does not rely only on genetic tools, but a variety of nutritional and environmental causes has been shown to influence the physiological characteristics of microalgae.

On the other side, several aspects of process optimization are under the spotlight to increase productivity at the industrial level. The design at a large scale must take into account several aspects like nutrient feeding, thermal regulation, pH adjustment, and mixing. Ideally, closed photobioreactors (PBRs) should enable optimal control of culture conditions minimizing the practical and economic constraints. Energy requirements and construction costs of closed PBRs still hinder their application for large-scale production. Therefore, the big challenge is to provide maximal performance and user-friendly tools for industrial exploitation.  Different approaches to optimize bioprocesses can lead to enhanced productivity. Assessing PBR geometries suitable for the cultivation of specific strains is crucial since microalgae do not have a single standard response. Long-term modeling efforts also provide engineered operation strategies for the predictable massive production. Analytical relations that can easily be applied to predict biological behavior are valuable information in a preliminary engineering phase. The control problem concerning microalgae biomass production in large-scale PBRs is composed of different control levels because, depending on the final use of the biomass, different control objectives (productivity, economic issues, quality aspects) need to be fulfilled during the production process.

Modeling microalgae growth and photoacclimation under different conditions at the industrial level is the core of the project. The effects of several light regimes (dark-light cycle, light mixing, and light pulsing) and temperature will be studied to evaluate the effects on the photosynthetic activity and other metabolic processes. Advanced remote-control systems will be developed and integrated in PBR with different geometries.

Currently, the cultivation of different species has been tested in cylindrical plastic bags with an integrated remote-control system. It is a cost-effective and flexible method to test different operational conditions to produce raw biomass and valuable components like lipids, polyhydroxybutyrate, accessory pigments, and exopolysaccharides from different strains.