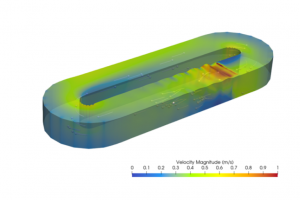 Velocity field simulated in a CFD program. Cell positions are tracked to compute the light that they perceive; the growth rate of each cell can then be estimated

Microalgae growth is highly affected by the light intensity that they receive. Lack of light drives slow growth, whereas over-exposition to strong light can damage certain proteins on the cells and slow down the photon harvesting process. Typically, both conditions are present in photobioreactors: one single cell can perceive low light in the deepest part of the culture and suddenly, due to mixing, go to the most illuminated part driving photoinhibition. We do not fully understand how the exposition to a strong light gradient in the culture affects the growth of each individual cell, yet some mathematical models are able to predict the production of microalgae in some conditions.

In addition to the fact that microalgae face a strong light gradient in bioreactors, they have evolved adaptive mechanisms to overcome photoinhibition, the so-called photoacclimation, in which each cell can modify the amount of pigments in order to avoid damage to the photosynthetic machinery. Both phenomena have different timescales: while the photodamage and recovery processes have timescales of minutes, photoacclimation has a timescale of days. Both phenomena affect the growth rate of the microalgae. Coupling two different models for different phenomena is challenging, especially if they have different timescales.

Mathematical models are calibrated on the basis of available experiments. The conditions under which
these experiments are performed are also important. Not all bioreactors have the same geometry and operating conditions; some of them have more than one species of microalgae, and the resulting interactions cannot be neglected. Moreover, some mathematical models can be very accurate in some conditions and useless in other situations. Modeling the growth rate of microalgae can be particularly complex.

A relevant issue is related to the scale-up from laboratory conditions to the industrial scale, where several processes must be optimized. Mathematical modeling plays an important role in this situation, where an accurate model can be used for monitoring, control, and optimization. Combining computational fluid dynamics (CFD) and biological models to estimate the growth rate in a bioreactor is getting more attention. By doing so, we can track the light history that a single algal cell perceives as it moves through the bioreactor (see image). We can then estimate the growth of a single cell and extrapolate to the entire bioreactor productivity. There are some obvious limitations: running a computational fluid dynamics model is expensive in terms of computational resources; moreover, since biological models were developed using experiments that have different configurations, there is no model that can perfectly describe the growth rate of a single cell.

To summarize, modeling the growth of a microalgae culture is a highly complex task, especially at industrial scales where many factors must be considered. These factors can be biological or specific to the bioreactor operation. Our goal is to create a model that can be used for monitoring and optimization of processes to obtain the best performance of the culture taking into account biological and operational factors.