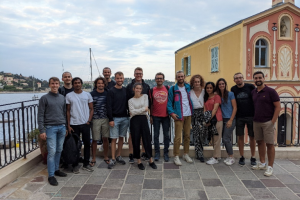 The ESRs in Villefranche-sur-Mer

Between 1st and 8th July 2022, Wageningen (Netherlands) hosted the 7th International Course on Microalgae Process Design, organised by Graduate School VLAG in co-operation with Bioprocess Engineering and AlgaePARC (Wageningen University & Research). All ESRs took part in the summer school and had the opportunity to increase their knowledge on the several types of bioreactors used in microalgae-based processes, with a particular view to understanding how they are linked to the concepts of photosynthetic efficiency and microalgae productivity. Researchers were also involved in a week-long practical experiment, in which they were tasked with cultivating microalgae in vertical-panel photobioreactors that simulate day/night cycles, choosing the most appropriate harvesting strategy to maximise microalgae productivity. The use of numerical simulation tools helped the researchers evaluate the influence of each factor before applying the preferred cultivation strategy to the real bioreactors. During the course, ESRs also visited AlgaePARC and attended talks given by professors of Wageningen University & Research and other universities involved in the DigitAlgaesation project.

Between 17th and 23rd September 2022, a summer school on “Modelling and Control of Photobioreactors” took place at INRIA (Sophia Antipolis, France). The course was organized by Prof. Oliver Bernard and Prof. Filipa Lopes—in collaboration with the BIOCORE group—and was attended by all ESRs. Researchers were involved in several activities, with the objective of deepening the knowledge of biological modelling and automatic control. The theoretical part was mainly focused on mathematical model development, calibration, validation, and control. In parallel with face-to-face lectures, the ESRs had the opportunity to apply the newly acquired skills during practical sessions that involved implementing different case studies in Python and MATLAB. The analysed case studies included real-life modelling problems in bioreactors, such as light distribution, nutrients uptake mechanism, biofilms, and wastewater treatment. Throughout the summer school, ESRs were able to strengthen their understanding of mathematical modelling and recognise its useful applications, also thanks to several presentations given by the members of the BIOCORE group and a visit to the Laboratoire d’Océanographie in Villefranche-sur-Mer.

By Marco Sandrin and Rebecca Nordio