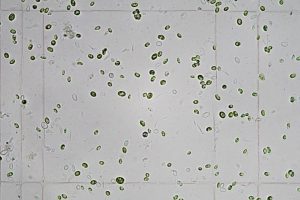 Microalgae have multiple applications in many diverse sectors that already make their cultivation profitable, such as pharmaceuticals, cosmetics or food supplements. One of the most appealing applications of microalgae lies on the energy sector because of microalgae’s high lipid content and renewable nature.

However, the biofuels obtained from microalgae’s biomass are still not competitive with classical fuels due to the low productivity and high cost of microalgae cultivation processes. In order to exploit microalgae’s potential to the full, it is necessary to optimize process design and operation of microalgae cultivation and biomass productivity. For this purpose, we need models that we can identify and calibrate, which is quite a challenging task, as these models often contain complex equations with a large number of parameters that are frequently correlated, hindering the process of model identification.

Therefore, the goal of this project is the development of a microphotobioreactor that would help us overcome identification problems such as limited system observability, noisy measurements and variable biological responses. Working on a microscale brings the possibility to reduce the time and cost required to evaluate the single effect of multiple variables in microalgae growth, also making control easier. It also helps reducing some side-effects that hinder the comprehension of the process. For example, a self-shading effect between the cells can limit the understanding of how light interacts with the microorganisms, and the bigger the scale, the bigger this effect becomes.

Some of the assets of the reactor under development are: the capability of supporting long-term culture of algae cells, allowing the setting of different temperature levels and complex light dynamics and being compatible with on-line imaging. The evaluation of the reactor’s performance is carried out through cellular counting, fluorescence measurements and protein, carbohydrate and pigment content analysis.