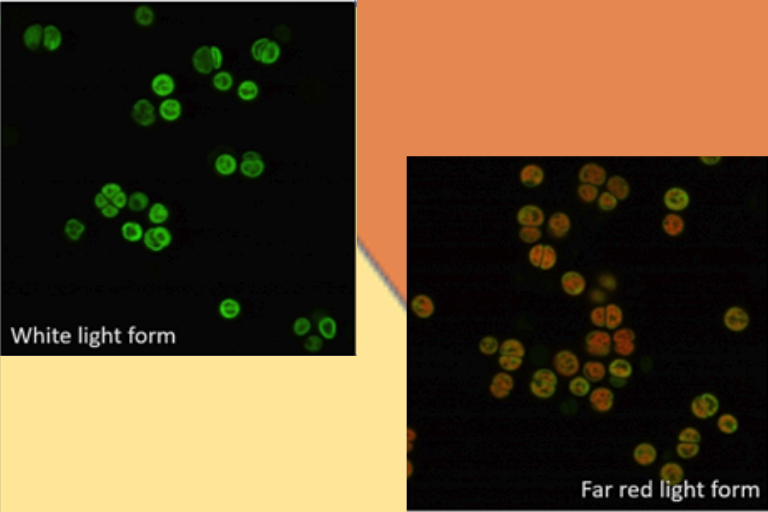 Photosynthesis is the process that harnesses the energy of photons that hit the Earth’s surface to split water and produce molecular oxygen that energizes the atmosphere while forming the biomass that sustains all the food chain in the form of biomass, and our economies and lifestyle in the form of fossil fuels.

Most oxygenic photosynthetic organisms are tailored to use the same portions of the solar spectrum, not far from the range of radiation that we can see with our eyes. Wavelengths below 400 nm are too energetic to be employed safely, while wavelengths above 700 nm simply cannot deliver enough energy to drive the process. The wavelength range used by most organisms is called photosynthetically active radiation (PAR).

This changed forever with the discovery of two types of “low energy” photosynthesis that allow different organisms to perform the same tasks but with less energetic photons. The first, discovered in 1996 was the cyanobacterium Acharyochloris marina, that containing mostly chlorophyll d, is able to use radiation up to 740nm. The latter, then named chlorophyl f, is now known to be present in at least 50 cyanobacterial species spread around different ecological niches. When these organisms sense a reduction of the amount of white light compared to far red light, chl f is synthesized along with subunits of photosystems and antennas, allowing them to transiently remodel their photosynthetic apparatus and to extend their absorption spectra up to 750nm in an acclimation process known as FaRLiP (far-red light photoacclimation).

Changes in the absorbance of these organisms vary from species to species, but this acclimation process enhances light harvesting in wavelengths comprised between 700 and 750nm, accounting for a potential 19% increase in available photons, providing scope for improvement to the theoretical maximum efficiency of photosynthesis. The possibility of expanding the absorption range of photosystems and antennas to limit the amount of self-shading has created both in academia and industry a renewed interest in trying to couple it with existing photosynthetic bioprocesses in order to achieve to higher productivities

However, to be able to effectively design biotechnological applications of far-red photosynthesis, we first need to better understand what the functional penalties are to this improved harvesting capabilities, since these could range from enhanced sensitivity to photodamage to losses in efficiency of excitation energy trapping. Moreover, a better understanding of the acclimation process itself is needed to be eventually able to tune its triggers, speed and overall effects on the photosynthetic apparatus to be used in agricultural or biotechnological processes.

Under the supervision of Prof. Rutherford and Prof. Chachuat, I am developing a controlled growth environment for the “far red” strain, while trying to develop a model that predicts photosynthetic parameters of far red acclimated cyanobacteria.