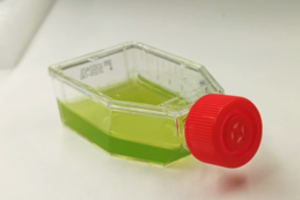 Over the last two decades, microalgae have become an increasingly popular source for the sustainable production of pharmaceuticals, food and feed, and other goods. However, the cultivation of microalgae and the production of valuable products still has limitations that have not yet been overcome. For instance, the cultivation of microalgae in industrial plants compels the algal cells to live in an environment that differs strongly from their natural habitat.

During cultivation in industrial photobioreactors, microalgae reach extremely high cell densities whereas in nature they live in rather dilute communities. In photobioreactors cells can therefore experience strongly variable light conditions due to mutual shading, as well as nutrient limitation. Moreover, the chemical composition of microalgae is often not completely congruent with our desired pipe dreams, forcing scientists to often choose their microalgae species by trading-off between optimal growth rates, ease of cultivation and preferred cell composition.

To address these challenges, genetic engineering of microalgae strains can be a powerful tool to adapt algal cells to industrial cultivation or to alter their chemical composition towards our desired profiles. There is a plethora of techniques for genetic engineering; however, most of them rely on deleting or overproducing gene products which can then affect photosynthetic efficiencies or metabolic pathways.

Importantly, the behavior of genetically engineered microalgae strains often strongly depends on their culture conditions including for example light intensity, temperature, nutrient availability, or the geometry of the photobioreactor. Moreover, the same genetic alterations can lead to highly diverse effects in different species. For this reason, we need to investigate differences in the photosynthetic apparatuses of microalgae to identify interesting targets for genetic engineering.

Under the supervision of Prof. Tomas Morosinotto, I am generating mutants of different players involved in photosynthesis in microalgae of the genus Nannochloropsis, to analyze their effect on the photosynthetic efficiency. Furthermore, I aim to alter the chemical composition (e.g., protein composition) of these microalgae to adapt their nutritional value and optimize them for industrial use.

Subsequently, I will characterize the generated mutants in variable cultivation systems to identify the growth conditions under which we can exploit a putative positive effect of our genetic alteration the most.